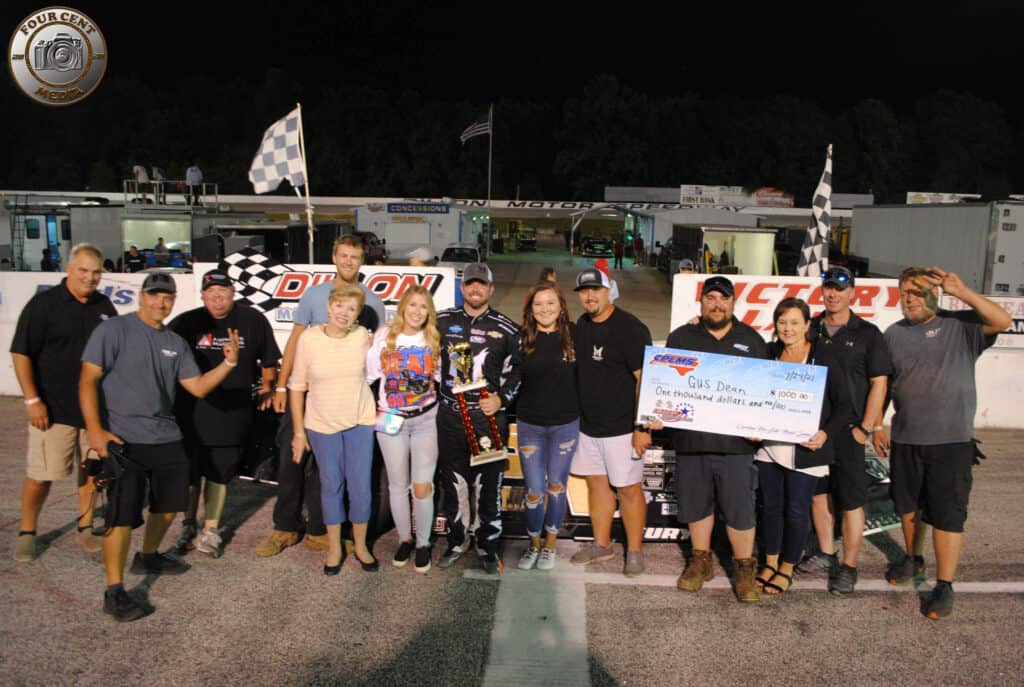 While the NASCAR driver expected to have success, he didn’t think he would chasing an incredible record aboard his No. 21D Chevrolet.

“I cannot believe what we have accomplished this season,” said Dean. “It’s very humbling for sure, but I cannot take all of the credit.

“I’m just the lucky guy that is able to drive these race cars, it’s the hard work of everyone on the DLP Motorsports team who continues to pour their heart and soul into our program.”

In the most recent race last month at Dilon (S.C.) Motor Speedway, Dean rallied from a ninth-place starting position to capture his third consecutive victory in the series in a thrilling green-white-checkered last-lap pass.

Dean steadily worked through the field to find himself in the runner-up spot when the caution waved at Lap 73. Despite a tight-handling No. 21D DLP Motorsports | MASHONIT Apparel Chevrolet pulled a veteran move on Josh Lowder coming to the checkered flag utilizing the bottom lane to sneak ahead of Lowder by 0.020-seconds at the finish line.

“What a blast Dillon was,” added Dean. “Josh (Lowder) raced me clean on the last lap. I sincerely appreciate that and respect him as a competitor. We didn’t have the fastest DLP Motorsports Chevrolet, but we were methodical with the car and definitely went into tire saving mode the later we got into the race and it paid off.”

It’s been a while since Dean has been to the fastest 3/8-mile track in the country. The 19-degree banked turns allow for heart-throbbing side-by-side actions – allowing fans to enjoy grassroots racing at its finest.

During his competition in the X-1R Pro Cup Series (now CARS Tour), Dean, who recently got engaged to his fiancé Briar Foran competed in three events where he carried two top-five finishes and three top-10 finishes, including a track series best of third twice, most recently in 2014.

He also has three starts in CARS Tour competition at Orange County with his most recent effort in 2016.

While it’s been more than half a decade since Dean has visited or competed at the track, he is confident that his prior experience will give him an edge.

“It’s been a while since I’ve been to Orange County, but I’ve turned hundreds of laps there,” added Dean. “That certainly has to count for something. Believe it or not, I’m still learning about these Late Models. They don’t drive the same way as a Super Late Model would – but I think I have adapted well.

“Dillon didn’t turn out as smooth as our other races this season, but in the end, we still have the same result and that was celebrating in Victory Lane. And that’s what we hope to be doing on Saturday night.

“Buggy” and all the DLP Motorsports are very comfortable with knowing what I need in a race car, and I think we’ll have a good setup that we can start with and roll from there.

“As I have said before, we’ve certainly have had many blessings in racing, but nothing feels better than capturing that checkered flag and climbing out of the car celebrating. Winning again is our priority on Saturday night, but it is going to be a stacked field, so we will stay humbled and focus and hope it all works out again.”

While Dean, 27 is currently concentrated on the Carolina Pro Late Model Series, his Dean Racing team is continuing to work hard behind the scenes for additional races in 2021 and 2022.

“We have a lot going on right now behind the scenes,” Dean continued. “Racing is everything to me and we are working hard to make sure that when I get on the track this summer, fall and we even have started working on 2022 already. Anything I climb into will give me the opportunity to showcase my ability and challenge for that checkered flag.”

David “Buggy” Pletcher, owner of DLP Motorsports is thrilled to have the popular driver back on board this weekend.

“There isn’t another driver I would want behind the wheel of our race car than Gus Dean,” Pletcher said. “Gus is a wheelman and isn’t afraid to make moves to get to the front and stay there. He has shown that a lot this year.

“I believe he has turned a lot of heads in this series in a very short amount of time and definitely earned the respect of his competitors. When they see Gus at the track, they know he’s going to be a threat.

“I’m again excited about the car we are bringing him and feel like we have a shot to continuing our winning ways on Saturday night.”

Dean is a two-time winner in the ARCA Menards Series with victories at Talladega (Ala.) Superspeedway and Elko (Minn.) Speedway, respectively.